SAMSUNG has unveiled a water-resistant “outdoor” TV designed to live in your garden.

The 4K telly has boosted brightness – and even comes with a rugged rain-proof soundbar.

Samsung promises more than 2,000 nits of brightness – an iPhone 11 reaches around 625 nits, by comparison.

That’s so you can view the telly outside on a bright sunny day without having the screen completely washed out by light.

And the TV is IP55-certified, which means it’s capable of withstanding water and dust.

Interestingly, Samsung may not be entirely confident in the water-resistance.

IP55 isn’t the highest level of waterproofing, and all of Samsung’s promotional materials show the TV with some kind of roof overhead.

Still, with an overhang above, an IP55 TV should easily survive some wind-swept drizzle.

The TV requires a single power lead, so you may need to hook it up to an extension cable.

You’ll also need to mount the TV as it’s designed to work without a base.

It’s got loads of premium features, including a wide viewing angle, a 4K Ultra HD resolution display, and 3 HDMI ports on the back. 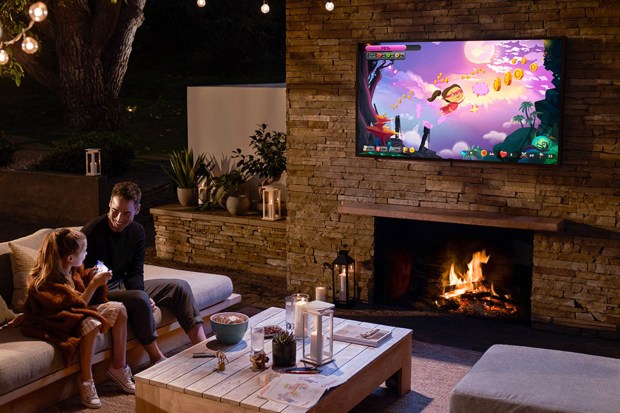 It’s also got “ambient mode”, which lets you use the TV as a virtual wallpaper to match its surroundings – or as a showcase for some digital art.

The TV is only available in the US and Canada right now, but will roll out to other regions globally later this year.

The Samsung Terrace is available to buy from today.

Samsung says the TV is water- and dust-resistant[/caption]

Most read in Phones & Gadgets

In other news, Samsung recently released a “tactical edition” Galaxy S20 phone with a beefy case and “stealth mode”.

And, a huge Google Chrome update reveals if your passwords have been hacked.

Would you put this telly in your garden? Let us know in the comments!

We pay for your stories! Do you have a story for The Sun Online Tech & Science team? Email us at tech@the-sun.co.uk